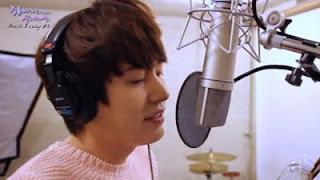 The gorgeous song is the 2nd lineup for the special project album of talented composer
Hwang Sungjae. The Hwang Sungjae Project Album “Superhero” celebrates the 15th anniversary of the composer’s debut. The album will include a total of 10 songs which were recorded in the past by other famous artists. However, the songs will be remastered
and recorded by new singers.

“Love Dust” was previously recorded by the Bubble Sisters in 2006. The composer says
that Kyuhyun maintains the original feeling of the song but that his version is “more
concise and warm.”

Without a doubt, Kyuhyun does indeed deliver a wonderful rendition of the song with his beautiful phrasing and flawless vocals. As with other solo recordings such as ”Late Autumn”, Kyuhyun once again shows us that he goes far beyond being a handsome face in a popular boy band. He is an extremely talented musician and a true artist.

The first single to be recorded for the project album was “Atlantis Princess” by Park Jung
Hyun, a song made famous by BOA. The next line up for the album is yet to be announced.
To check out an interview and behind the scenes footage for the making of “Love Dust,”
watch the video below and video features the full length song as recorded by Kyuhyun.